The town of Canton was lovely decorated up downtown for the Spoon River drive.  This is a stop that always moves me because I write for Red Power and know how important the International Harvester connection was in this town.  With years of ties to International Harvester, we found an Inn appropriately named, “The Harvester Inn”. While the inn opened in 2011, although it is not a historic building, the name and some of the pictures inside allude to the Farmall history.

On the side of a building downtown is a picture stating, “Historic downtown Canton”.  Canton’s website posts history of some of the agricultural giants in the area that preceded the Farmall connection.  “Robert C. Culton, a native of Kentucky, came to Canton in 1836 and purchased the blacksmith shop owned by Ira Baker on the northeast corner of South Main and Pine Streets, the same location of Culton’s carding mill.  In 1840, Mr. Culton began the manufacture of plows, the first being the old-fashioned Diamond Plow, which was the forerunner of the steel mould-board plow.”

Besides Culton’s Diamond Plow, he also created the Carey Plow, and the Bar Share breaking plow. The Diamond Plow had a diamond shaped piece of iron which was curved with the lower edge sharpened. While not as revered, Joseph H. Gardiner was the first in Fulton County to produce threshing machines, reaper, and the Gardiner Cultivator. In his honor, Gardiner Corners was named after him. 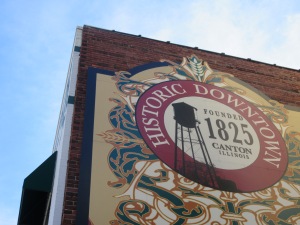 Anyone into IH history probably knows the story of the International Harvester Company–Canton Works- that was started by William Parlin.  Traveling from Massachusetts, Parlin arrived in Fulton County on July 4, 1840.  Culton’s name comes up again when Parlin began working for R. C. Culton as a journeyman in his blacksmith shop.  In a short time he became a partner with Culton and this worked until Parlin went into business for himself. Buying a foundry, Parlin manufactured the first steel plow in Canton and worked at this site until a fire in 1842 claimed his shop.  He set up again in the former shop John Culton, and this eventually became the location of the International Harvester Company-Canton Works.

With business booming, in 1852 Parlin went into partnership his brother-in-law, William Orendorff, who became the sales and office manager, while Mr. Parlin controlled the manufacturing and development of the business. The company eventually became known as Parlin & Orendorff Company and was called P& O for short.  P&) made Clipper Plows, Parlin’s Cultivator, and cornstalk cutter as well as his disc harrow or disc plow, the double plow, known as the “lister”, or “double mouldboard plow.”

The company continued to grow and be successful with one disaster that struck when a boiler exploded on December 16, 1882.  Eleven men were killed in the accident; no one in the company was blamed for this incident.

The Canton history website states, “In 1919, the Parlin & Orendorff Company was sold to the International Harvester Company, and when it was announced in the Canton Daily Ledger that the factory had been sold, U. G. Orendorff stated: “In my belief and judgment the sale of the P & O plant and business to the Harvester Company is bound to be beneficial to the business and industrial interests of Canton….We are convinced that this change will be satisfactory in its effect to the business interests and people of Canton, as to our customers and to our employees here and elsewhere.”

Downtown in Canton there is a shop with the name Parlin and Orendorff still listed above the store and embossed on the window.  Knowing the IH connection, when we asked if the current owners were part of the family, they said, “I don’t know anything about it.”

So, while the factory is gone now, and the family business connection as well, there is still a name to recall the former glory.  Canton continued to be home to International Harvester until the 1980’s. The company survived a union strike, a fire and more until they shut their doors October 31, 1983.  Many vendors that set up have connections to the plant. They had a family member or if they are older, often they worked there as well.  Many IH items have been added to collections over the years that were picked up at the Spoon River Drive.