Sometimes it is the little things that make something special.  That extra thing that someone did or said. This year at the National Farm Toy Show, that little thing was a book that Richard Marcott’s daughter Julie Blegos made for her dad. Right before he left for the show that is held in Dyersville, Iowa each year, she gave her father a book with all of the prairie tractor models he had made for an exhibit.  Along with the pictures she included a description of the companies that produced the tractors and she added some family photos as well making this both an educational piece of Richard’s display as well as a .family treasure

Richard’s display focused on prairie tractors, and prairie tractors have been receiving a bit of attention this past year. They were the featured event at the 2015 Half Century of Progress and now Richard Marcott brought their beauty to life with his amazing display of prairie tractor models at the National Farm Toy Show in Dyersville this past weekend.  The National Farm Toy Show is always held the first weekend in November and although Richard has been coming to the show since 1984, this was the first time he entered the farm layout contest.

Richard has been working on these models for years.  He said it takes him six months to complete one of the beauties.  His interest in the prairie tractor stems from his own 1926 Rumley-M25  that he has at home. After he retired from trucking Richard decided to make a model of his beloved Rumley and the rest is history.  At this year’s National Farm Toy Show Richard took home the 2nd place trophy for the adult large scale layout category.  His scratch built models are a labor of love and the visitors that stopped to see them, my husband and I included were blown away by their beauty and the handcrafted labor that went into each and every one 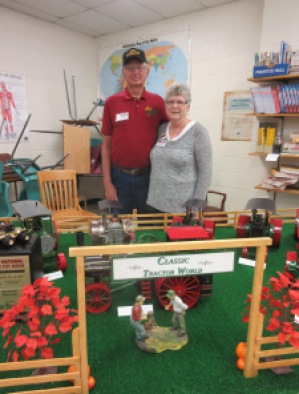 While Richard’s display was special, to me what was so touching was the book that his daughter made for him.  Richard and his wife Joyce had a great time showing Richard’s amazing handiwork at the toy show and I noticed that he always directed visitors to the book to see the history of the models and some of the family photos as well.  Long after Richard has returned home to Spring Valley, Wisconsin and put his models on the shelf, he and Joyce will revel in the book and the memories from the show. They will turn pages that were made with one of the Ten Commandments in mind, Julie Blegos surely honored her father and mother.  The memories will live on.